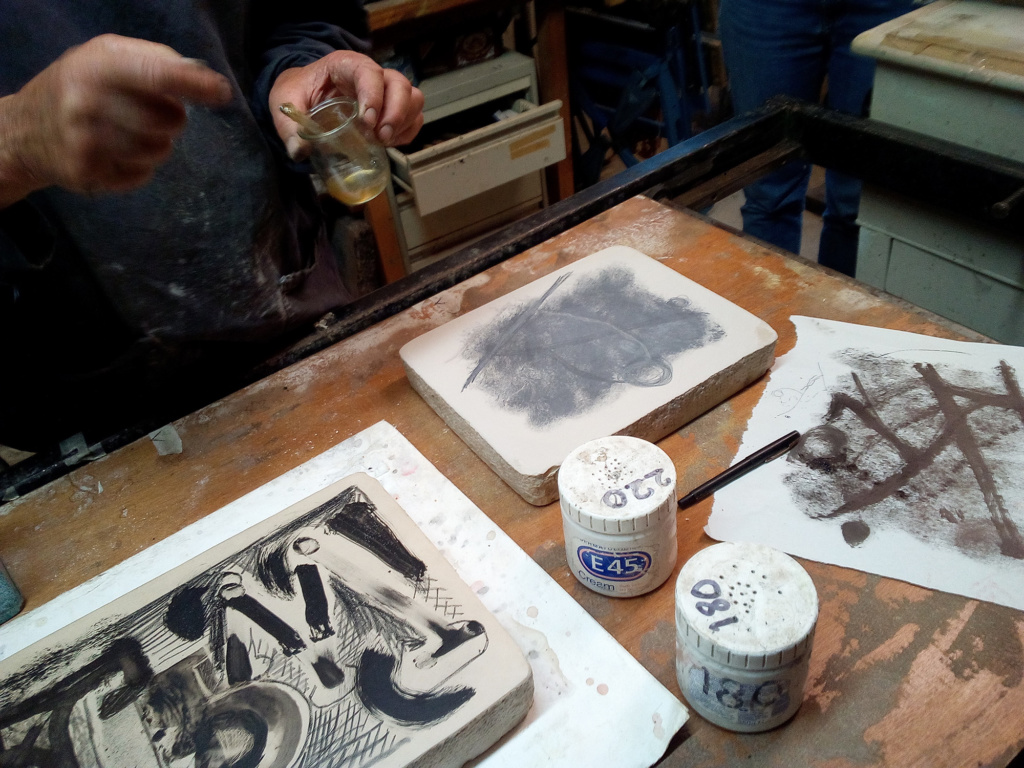 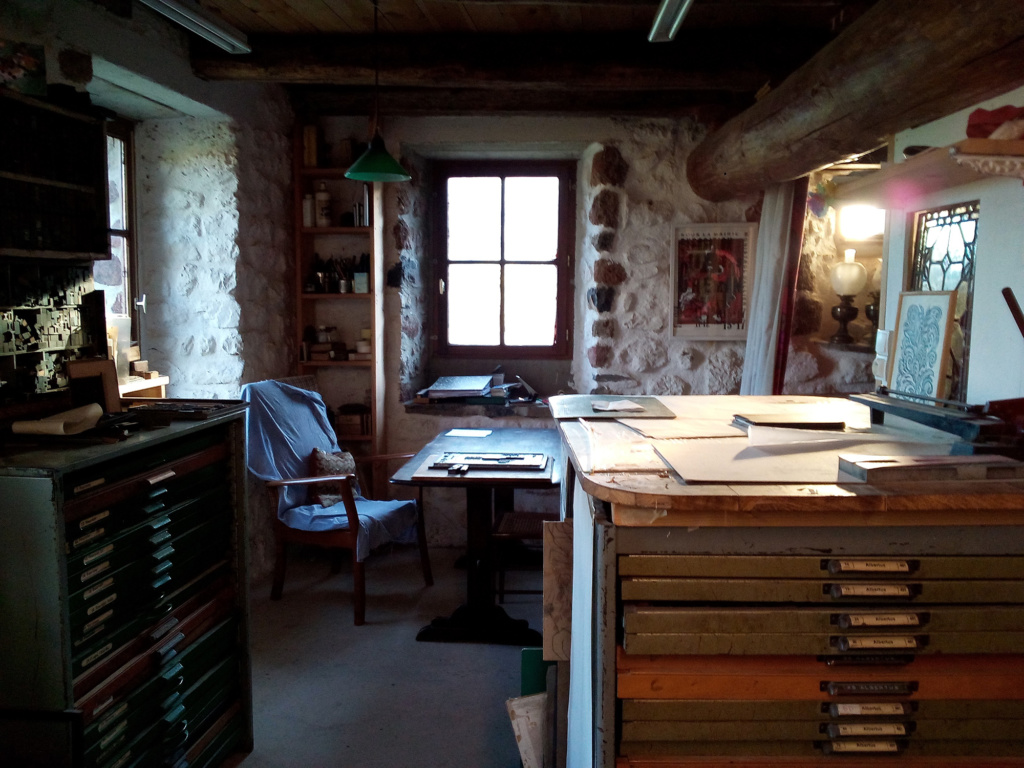 In the middle of nowhere, or in the middle of France; that’s where I spent some days last May. I actually went back to see John Spencer, one of the pillars of Letterpress Workers and, above all, a good friend.
John lives in Conac, a small hamlet of Saint Privat d’Allier, near Le Puy, in a late 19th century building, once used as a stable for sheep, now converted into a home and laboratory. Three levels on which intersect Albion presses and refrigerators, drawers of types and comfortable sofas, a kitchen with a lithographic press next to it. A fantastic micro universe that fully represents the frugal complexity of its creator.
The first time I came, in the summer of 2018, I was struck, it seemed to be in the cheerful version of a Tim Burton’s movie, all set in a little-known French countryside very similar, in the spirit, to other places I love. The reason for the second visit was more professional. While the first time, for me and Chiara, my partner, it was a real holiday, this second short stay was (also) aimed at trying to make a short artist’s residence. That’s why we weren’t alone: in addition to us, Guillaume Beautemps (another friend of Lpw) and his partner Marionne also came. Together we experimented, for the first time, with lithographic printing. Having seen star presses and engraving stones at other times, I was convinced that it was a relatively immediate matter. Not simple but, in any case, very close to typographic printing. It’s enough to ink the stone (engraving it in some way unknown to me), put the sheet on it and let everything pass under the pressure rolls. Instead, it turned out to be a rather complex affair, where the pressure has to do with it but up to a certain point. And chemistry comes into play.
In fact, the printing process is based on a continuous putting and removing of acids, dust, inks, always being careful not to dirty the stone. There is a certain historicity during the passages (perhaps due to the fact that it is a type of printing widely used by artists) and the attention that is paid to the use of chemical elements (to avoid corroding the hands) brings to mind the alchemical practice.
In fact, thanks to John’s experience, if not the Philosopher’s Stone, we pulled something good out of it. The engraving part of the stone, which consists of “drawing” on it with wax crayons, lapis or inked brushes, was quick, the slower it was to decide what to put in. Wanting to experience the chromatic differences obtained with the different tools, I thought it might be interesting to report a sort of map of the area, highlighting the points of interest. But I didn’t expect a sort of ghost knight to come out!
This appearance proved useful in suggesting what to write with types (using a fantastic Farley press): a half a warning to unwary visitors. Or, at least, for the wayfarers on the nearby Way to Santiago.
Guillaume has proved, unlike me, extremely prolific and has produced a small series of typographical variations, passing from Gill Sans to some really large serifs.
In the end what came out was an interesting portfolio, I hope a taste of much more. 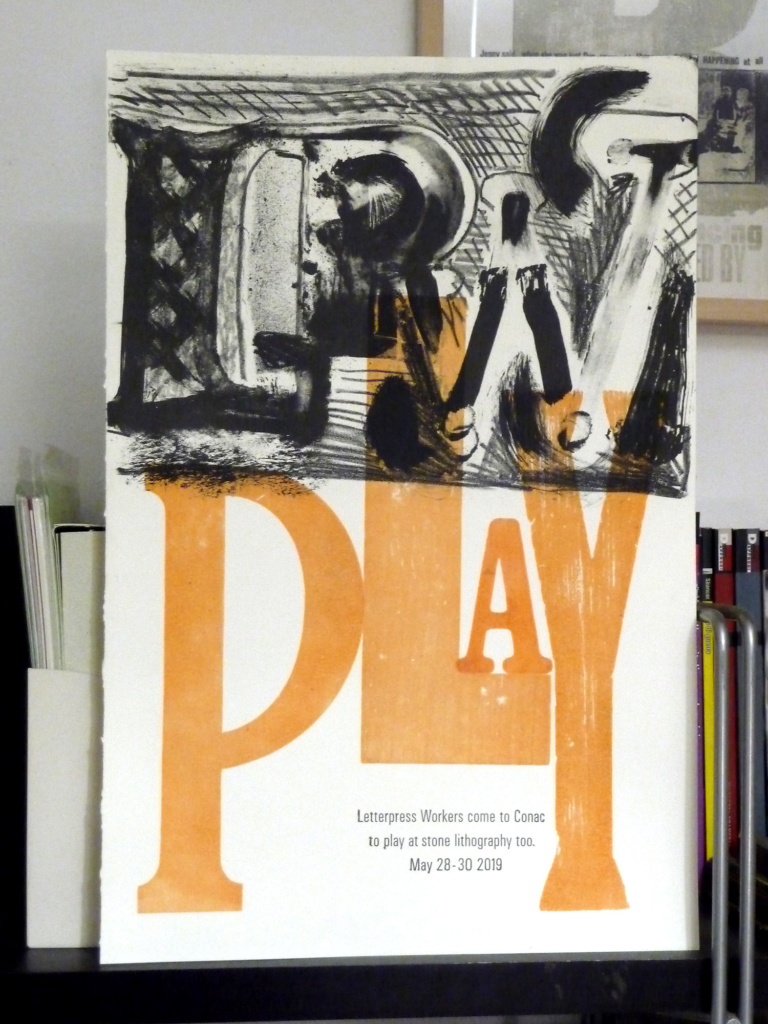 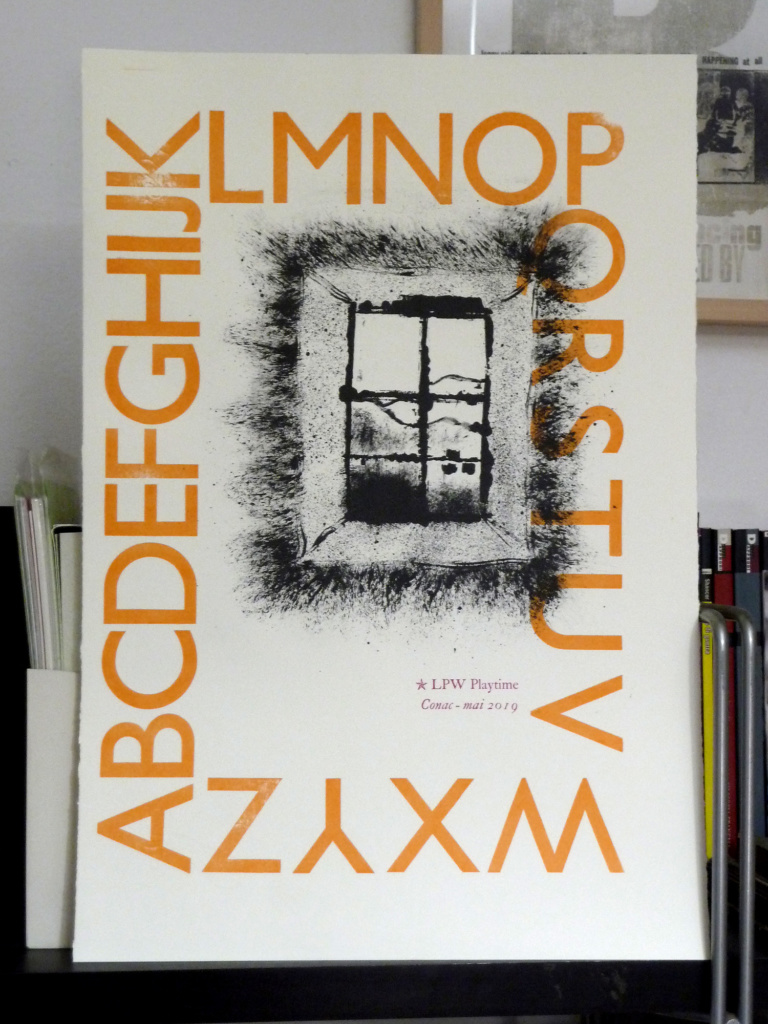