I had never heard of Dario Fiori until a couple of years ago, when I read this sentence online, in a posthumous memento written by Franco Berardi Bifo. It really struck me, both for the irony and for the incredible topicality of the message.

Dario was an architect, stylist, but also a political militant and cultural agitator, creative graphic designer, TV author and a passionate collector.

This is how Bifo, in the presentation text for an exhibition dedicated to him, describes his old friend and comrade. A comrade of a time, the Italian 70s, in which communication, political militancy and creativity were united within a mass movement that fighted for a big change of the society. They did not succeed but they tried and Dario Fiori was one of those.

Then I remembered an old publication, La rivoluzione della creatività, taken who knows when and where, curated by Bifo as well. It is a collection of DIY magazines, from the most famous ones such as Zut and A/traverso to obscure metropolitan collective fanzines, lasting a maximum of three issues.
Beyond the life and fame of each one, what is most striking is the enormous charge of sarcasm transmitted by those pages. What made them so were not only the texts but also the truly unscrupulous use of typography and images. All this contributed to create a new mode of language and Dario Fiori was one of the most aware of this.

Using new languages, articulated and thinking, is extremely important both to feed the communities in which we live and to unhinge the pervasive ones that surround us.

And this sentence is extremely useful for this purpose.

There are two formats: I have distributed the postcard around, in some bar, squatt, left them on some benches. I still have some in the studio, for those who come to visit me.
The poster, on the other hand, was made on the occasion of the Eight March, to keep in mind that the struggles are intertwined and what the final goal is. 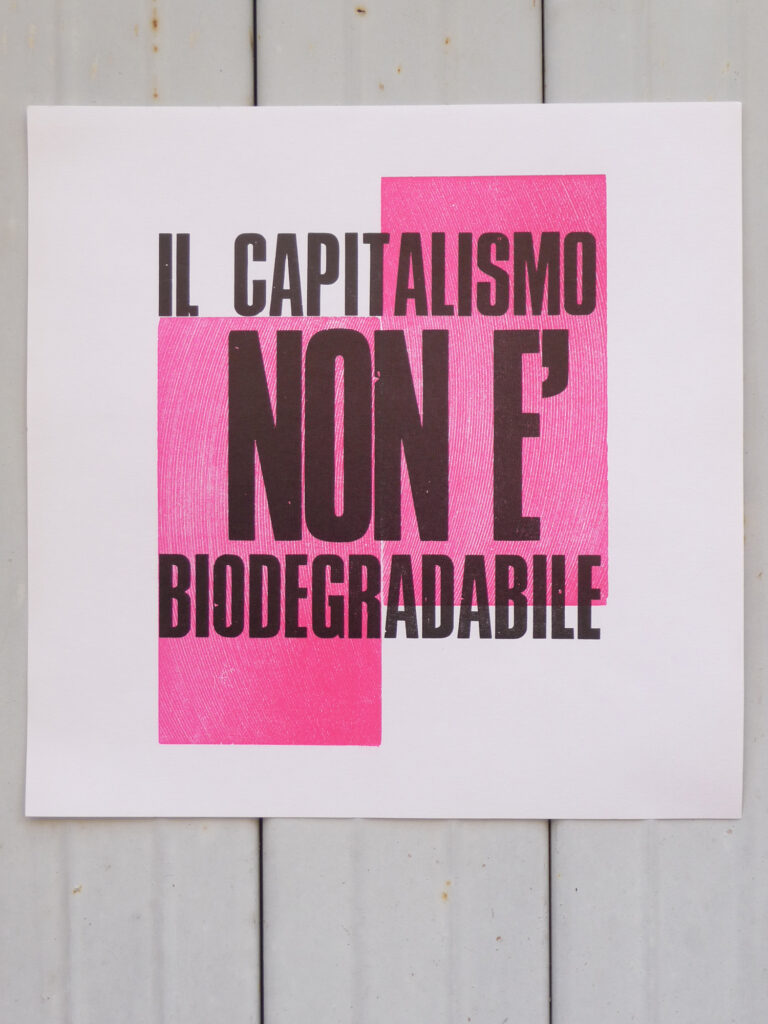